The Language of Hoofbeats

Home The Language of Hoofbeats

The Language of Hoofbeats by Catherine Ryan Hyde 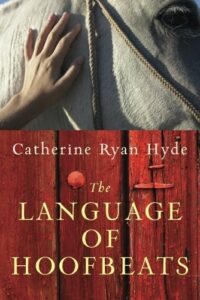 From the bestselling author of Pay It Forward comes a story of the heartbreak and healing power of family. New to a small town, Jackie and Paula envision a quiet life for their kids: a young adopted son and two teenage foster children, including the troubled Star. However, they quickly butt heads with their neighbor, Clementine, who disapproves of their lifestyle and is incensed when Star befriends her spirited horse, Comet. Haunted by past tragedy and unable to properly care for Comet, Clem nevertheless resents the bond Star soon shares with the horse. When Star disappears with Comet, the neighbors are thrown together—far too close together. But as the search for the pair wears on, both families must learn to put aside their animosity and confront the choices they’ve made and the scars they carry. Plumbing the depths of regret and forgiveness, The Language of Hoofbeats explores the strange alchemy that transforms a group of people into a family.

Catherine Ryan Hyde is the author of 27 published and forthcoming books, including TAKE ME WITH YOU, WHERE WE BELONG, WHEN I FOUND YOU, WALK ME HOME, SECOND HAND HEART, DON'T LET ME GO, and WHEN YOU WERE OLDER. New Kindle editions of her backlist titles FUNERALS FOR HORSES, EARTHQUAKE WEATHER AND OTHER STORIES, ELECTRIC GOD, and WALTER'S PURPLE HEART are now available. Also available is THE LONG, STEEP PATH: EVERYDAY INSPIRATION FROM THE AUTHOR OF PAY IT FORWARD, her first book-length creative nonfiction.

She has three new novels forthcoming from Lake Union/Amazon Publishing, including THE LANGUAGE OF HOOFBEATS in December of '14 and WORTHY in the summer of '15.

An avid hiker, traveler, and amateur photographer, she has just released her first book of photos, 365 DAYS OF GRATITUDE: PHOTOS FROM A BEAUTIFUL WORLD.

She is co-author, with publishing industry blogger Anne R. Allen, of HOW TO BE A WRITER IN THE E-AGE: A SELF-HELP GUIDE.

Her best-known novel, PAY IT FORWARD, was adapted into a major motion picture, chosen by the American Library Association for its Best Books for Young Adults list, and translated into more than 23 languages for distribution in over 30 countries. The paperback was released in October 2000 by Pocket Books and quickly became a national bestseller. Simon & Schuster released PAY IT FORWARD: YOUNG READERS' EDITION in August of '14. It is suitable for kids as young as eight. A special anniversary edition of the original PAY IT FORWARD is forthcoming in December of '14

LOVE IN THE PRESENT TENSE enjoyed bestseller status in the UK, where it broke the top ten, spent five weeks on the bestseller lists, was reviewed on a major TV book club, and shortlisted for a Best Read of the Year award at the British Book Awards. Both BECOMING CHLOE and JUMPSTART THE WORLD were included on the ALA's Rainbow List, and JUMPSTART THE WORLD was a finalist for two Lambda Literary Awards. WHERE WE BELONG won two Rainbow Awards in 2013.

More than 50 of her short stories have been published in The Antioch Review, Michigan Quarterly Review, The Virginia Quarterly Review, Ploughshares, Glimmer Train and many other journals, and in the anthologies Santa Barbara Stories and California Shorts and the bestselling anthology Dog is my Co-Pilot. Her stories have been honored in the Raymond Carver Short Story Contest and the Tobias Wolff Award and nominated for Best American Short Stories, the O'Henry Award, and the Pushcart Prize. Three have been cited in Best American Short Stories.

She is founder and former president (2000-2009) of the Pay It Forward Foundation. As a professional public speaker she has addressed the National Conference on Education, twice spoken at Cornell University, met with Americorps members at the White House and shared a dais with Bill Clinton.

As an Amazon Associate Promocave earn from qualifying purchases