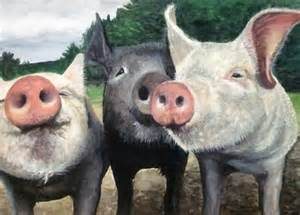 The pig has a tale to tell that, for one reason or another, has never been told – until now. Cheery by nature, the pig is splendid company and blissfully content, whether rolling in the mud, foraging for truffles or just snorting around the yard. Nevertheless, contrary to its reputation, the pig keeps itself scrupulously clean.

Despite the threat of countless predators, not least the human animal, the pig has always displayed a remarkable tolerance for the insatiable appetites of those who crave its flesh. Indeed, the pig is a living testament to ‘turning the other cheek’ and able to rise above the mockery of those who would vilify this gentle and peaceful creature. Existence to the pig, you see, is a transitory affair and known to be but a fleeting glimpse of the vastness and profundity of life.

The secret of the amicable nature of the pig is its tail, which spirals in the shape of a cone. It wasn’t always like that; but somewhere in the midst of time its tail went through a mystical transformation. In some ancient cultures, sages and wise men attributed a divine element to the pig, whose secret was said to be cosmic in origin. Before time had begun there was darkness and chaos. The light of the Great Will had yet to shine upon the plasma of the pool of life. Waiting tentatively behind the veil of existence were all of the creatures that ever could be; but at this stage of creation they had yet to take on physical form.

Lured by the fragrance of truffles wafting in from the garden of the earth, the pig was irresistibly drawn to the front of the queue. But before the pig could enter the outer realm there was a thundering sound and brilliant burst of light: ‘Wait!’ commanded the Great Will. ‘One of you must stay behind to prevent the darkness and chaos from entering the light of my Creation. Who amongst you would be prepared for such a task?’ Silence and trepidation ensued; and then the pig, perhaps ashamed of his eagerness to be the first in line, trotted forward in total surrender to the Great Will. What followed was a colossal struggle as the pig held back the chaos that, wave after wave, pounded the portal to existence. In what seemed an age, the pig, exhausted and drained, could finally enter the world.

But despite the pig’s noble effort, the human psyche had been corrupted with an impression of the darkness and chaos, which would manifest in time as man’s persecution of the pig and its descendants. Although the pig would undergo much hardship and deprivation, it was awarded a special place in the cosmos for its extraordinary valour and service performed on behalf of the greater good. Thus, the pig’s tail was fashioned to replicate the spiral of eternity as a sign of divine origin for all who had eyes to see.

So the pig settled in nicely to the business of being a pig, sacrificing its flesh and cleaning up the waste of the world – and all of this without complaint. This is because the pig is able to withdraw at will back to eternity on the other side of existence. When we human beings are able to do the same perhaps, like the pig, we’ll have a wondrous tale to tell.

Lance Kelly is a modern day mystic with feet on the ground.
Writer and author: 'The Myth of the Tarot'. The Amazing Journey of the Fool. Blog has posts on my perceptions of life and the mystery of existence.
www.lancekelly.co.uk
Share this
0 likes
Related Articles